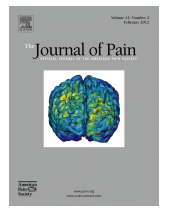 UNLABELLED: The diversity of chronic pain syndromes and the methods employed to study them make integrating experimental findings challenging. This study performed coordinate-based meta-analyses using voxel-based morphometry imaging results to examine gray matter volume (GMV) differences between chronic pain patients and healthy controls. There were 12 clusters where GMV was decreased in patients compared with controls, including many regions thought to be part of the “pain matrix” of regions involved in pain perception, but also including many other regions that are not commonly regarded as pain-processing areas. The right hippocampus and parahippocampal gyrus were the only regions noted to have increased GMV in patients. Functional characterizations were implemented using the BrainMap database to determine which behavioral domains were significantly represented in these regions. The most common behavioral domains associated with these regions were cognitive, affective, and perceptual domains. Because many of these regions are not classically connected with pain and because there was such significance in functionality outside of perception, it is proposed that many of these regions are related to the constellation of comorbidities of chronic pain, such as fatigue and cognitive and emotional impairments. Further research into the mechanisms of GMV changes could provide a perspective on these findings. PERSPECTIVE: Quantitative meta-analyses revealed structural differences between brains of individuals with chronic pain and healthy controls. These differences may be related to comorbidities of chronic pain.