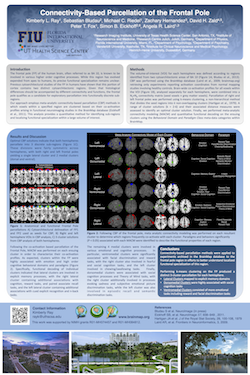 The frontal pole (FP) of the human brain, o6en referred to as BA 10, is known to be involved in various higher order cognitive processes. While this region has evolved expended from apes to humans, its precise functional specialization remains unclear. Previous cytoarchitectural studies of the FP in humans have shown that this portion of cortex contains two distinct cytoarchitectonic regions. Given that histological differences should be accompanied by different connectivity and functions, the frontal pole qualifies as a candidate for exploratory parcellation into functionally discrete subregions. Our approach employs meta-analytic connectivity-based parcellation (CBP) methods in which voxels within a specified region are clustered based on their co-activation profiles arising in functional neuroimaging studies in the BrainMap database (Eickhoff et al., 2011). This analysis provides a quantitative method for identifying sub-regions and localizing functional specialization within a large volume of interest.