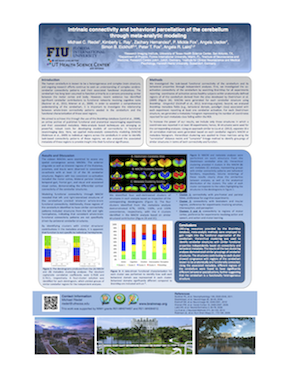 Meta-analytic methods have recently been developed that pool results from a broad range of independently published experiments to draw statistically significant conclusions about brain connectivity. These meta-analytic co-activation patterns provide results that are analogous to resting state functional connectivity maps, but the behavioral specificity of the observed patterns may be examined from the behavioral conditions employed in the contributing task-specific experiments. MACM provides an opportunity to model the connectivity of cerebellar structures from a functional perspective.

The regions of the cerebellum were defined according to the probabilistic atlas developed by Diedrichsen et al. (2009), as this is the best and most widely accepted structural parcellation strategy of the human cerebellum. Sleuth was used to search the BrainMap database for all experiments, under the context of normal mapping, reporting a coordinate of activation within each of the cerebellar structures. The following structures were omitted from further analysis due to insufficient data: X, Dentate, Fastigial, and Interposed of the Left and Right hemispheres, and VIIa Crus I, VIIa Crus II, VIIb, VIIIb, and X Vermis. GingerALE was then used to generate a MACM for each of the remaining 21 cerebellar structures based on the coordinates reported from each Sleuth search. Structures with similar connectivity patterns were identified through hierarchical clustering analysis (HCA) of a correlation matrix of the cerebellar MACMs. In a separate, but parallel analysis, metadata histograms were created by determining the number of coordinates reported for each behavioral domain, paradigm class, and stimulus type that were located within each cerebellar structure. Then, structures with similar metadata properties were identified through HCA of a correlation matrix of the metadata histograms. The “correlation” distance method, and “complete” linkage methods were used to produce a dendrogram from which the clusters of structures were visually identified.