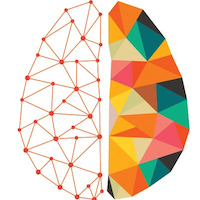 Cognitive processes do not occur by pure insertion and instead depend on the full complement of co-occurring mental processes, including perceptual and motor functions. As such, there is limited ecological validity to human neuroimaging experiments that use highly controlled tasks to isolate mental processes of interest. However, a growing literature shows how dynamic, interactive tasks have allowed researchers to study cognition as it more naturally occurs. Collective analysis across such neuroimaging experiments may answer broader questions regarding how naturalistic cognition is biologically distributed throughout the brain. We applied an unbiased, data-driven, meta-analytic approach that uses k-means clustering to identify core brain networks engaged across the naturalistic functional neuroimaging literature. Functional decoding allowed us to, then, delineate how information is distributed between these networks throughout the execution of dynamical cognition in realistic settings. This analysis revealed six recurrent patterns of brain activation, representing sensory, domain-specific, and attentional neural networks that support the cognitive demands of naturalistic paradigms. Although gaps in the literature remain, these results suggest that naturalistic fMRI paradigms recruit a common set of networks that allow both separate processing of different streams of information and integration of relevant information to enable flexible cognition and complex behavior.

This was the lab’s first preprint!