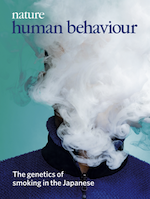 Learning a second language in childhood is inherently advantageous for communication. However, parents, educators and scientists have been interested in determining whether there are additional cognitive advantages. One of the most exciting yet controversial(1) findings about bilinguals is a reported advantage for executive function. That is, several studies suggest that bilinguals perform better than monolinguals on tasks assessing cognitive abilities that are central to the voluntary control of thoughts and behaviours-the so-called ‘executive functions’ (for example, attention, inhibitory control, task switching and resolving conflict). Although a number of small-(2-4) and large-sample(5,6) studies have reported a bilingual executive function advantage (see refs. (7-9) for a review), there have been several failures to replicate these findings(10-15), and recent meta-analyses have called into question the reliability of the original empirical claims(8,9). Here we show, in a very large, demographically representative sample (n = 4,524) of 9- to 10-year-olds across the United States, that there is little evidence for a bilingual advantage for inhibitory control, attention and task switching, or cognitive flexibility, which are key aspects of executive function. We also replicate previously reported disadvantages in English vocabulary in bilinguals(7,16,17). However, these English vocabulary differences are substantially mitigated when we account for individual differences in socioeconomic status or intelligence. In summary, notwithstanding the inherently positive benefits of learning a second language in childhood(18), we found little evidence that it engenders additional benefits to executive function development.