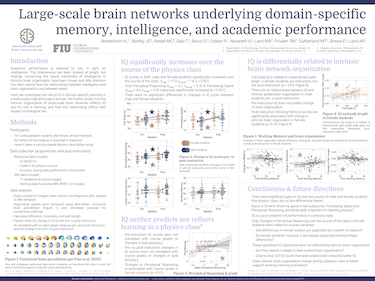 Academic performance is believed to rely, in part, on intelligence. This phenomena has been studied at length, but findings concerning the neural substrates of intelligence in intrinsic brain organization have been mixed, and little attention has been paid to how the relationships between intelligence and brain organization vary between sexes. Here, we investigate the role of IQ in domain-specific learning in a historically male-dominated domain. We further probe how the intrinsic organization of large-scale brain networks reflects IQ and its role in learning, and how this relationship differs with respect to biological sex.