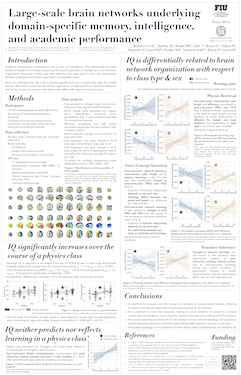 Academic performance relies, in part, on memory and intelligence. These phenomena have been studied at length, but little is known about the role of brain connectivity in integrating memory and intelligence to support academic success. Even less is known about if and how these relationships vary between sexes. Here, we take a targeted approach to investigate brain networks underlying domain-specific memory, general intelligence, and academic performance, and how these measures differ among female versus male students in a historically male-dominated domain. We focused on the hippocampus, default mode, and central executive networks, which support internally- and externally-oriented processes underlying memory and task performance. [1]

Behavioral differences between general and physics-specific memory were linked with differences in CEN and DMN connectivity, distinguishing processes by domain. The consistently stronger inter-network connectivity during general memory processing compared to physics-specific memory may reflect a Hebbian-like phenomenon, such that older (e.g., general) knowledge retrieval relies on a more strongly connected neural network than students’ newer (e.g., physics) knowledge retrieval.[3] However, female students showed greater coordination between the Hc and DMN, suggesting a reliance on autobiographical memories may facilitate domain-specific recall. Lastly, while performance on the physics retrieval task was predictive of course grade, no underlying neural contribution was detected.