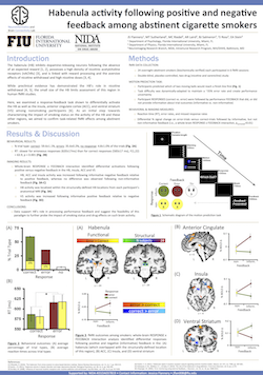 The habenula (HB) inhibits dopamine-releasing neurons following the absence of an expected reward [1, 2], possesses a high density of nicotinic acetylcholine receptors (nAChRs) [3], and is linked with reward processing and the aversive effects of nicotine withdrawal and high nicotine doses [3, 4].

While preclinical evidence has demonstrated the HB’s role in nicotine withdrawal [4, 5], the small size of the HB limits assessment of this region in human fMRI studies.

Here, we examined a response-feedback task shown to differentially activate the HB as well as the insula, anterior cingulate cortex (ACC), and ventral striatum (VS) among nonsmoking participants [6]. As an initial step towards characterizing the impact of smoking status on the activity of the HB and these other regions, we aimed to confirm task-related fMRI effects among abstinent smokers.