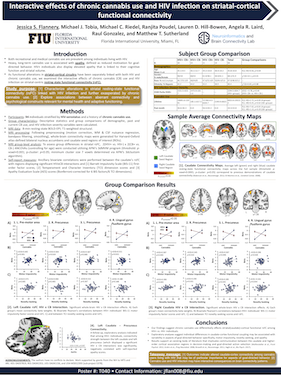 Both medical and recreational cannabis use are prevalent among individuals living with HIV (1). Given that functional alterations in striatal-cortical circuitry have been separately linked with both HIV infection (2) and chronic cannabis use (3, 4), and that such neurocircuitry is implicated in decision-making, action selection and impulsivity (5-7), we examined the interactive effects of chronic cannabis (CB) use and HIV infection on striatal-centric resting-state functional connectivity (rsFC).

Across all participants, average whole-brain NA and caudate rsFC maps were largely consistent with previous investigations of striatal functional coupling (8, 9). Regarding group effects, while NA rsFC did not display any main or interaction effects, HIVxCB interactions were detected for both the left and right caudate seeds with the left premotor cortex, right lingual/fusiform gyrus, and bilateral precuneus (Fig. 1A & 2A). Specifically, among HIV+ individuals, chronic cannabis users (vs. nonusers) displayed less caudate-cortical rsFC, whereas among HIV- individuals, chronic cannabis users displayed greater caudate-cortical connectivity (Fig. 1B & 2B).

To enhance the interpretation of these whole-brain outcomes, we explored the relations between caudate-centric rsFC and aspects of self-reported impulsivity. Given the caudate has previously been implicated in impulsivity and goal-oriented motor responses (5-7), we performed ancillary bivariate correlations between Barratt Impulsivity Scale (BIS-11) first-order factor scores (10) and the caudate’s rsFC with those regions identified above (Bonferroni-corrected for 6 BIS factors). Among HIV+ individuals, but not HIV- individuals, both left and right caudate rsFC with the left premotor cortex and left precuneus were significantly, positively correlated with motor impulsivity scores (Fig. 1C & 2C). Left and right caudate rsFC with the right precuneus and right lingual/fusiform gyrus were also positively correlated with motor impulsivity, however these correlations did not survive multiple comparisons correction. Self-control impulsivity scores were also significantly, positively correlated with the left caudate’s rsFC with the left premotor area and the right caudate’s rsFC with the left precuneus (Fig. 1D & 2D).

These findings suggest that chronic cannabis use has differential effects on striatal-cortical functional connectivity among HIV+ versus HIV- individuals. While further research exploring the cognitive-behavioral implications of these functional alterations is warranted, our exploratory correlation analyses suggest that individual differences in caudate-cortical functional coupling, among individuals living with HIV, may be associated with aspects of impulsivity. These findings support an existing body of literature implicating functional interactions between the striatum and higher-order cortical association regions with impulsivity.