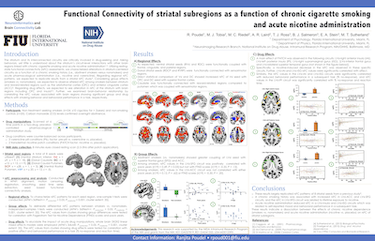 Extensive animal and human research implicates the ventral striatum (VS) and its interconnected circuitry in reward processing and addiction. Dysregulated VS resting-state functional connectivity (rsFC) has been linked with nicotine use and a failure to maintain abstinence. However, differential rsFC of striatal subregions remains to be more fully characterized as a function of a smoking trait (smoker vs. nonsmoker) and pharmacological state (nicotine withdrawal vs. administration). As such, we performed seed-based rsFC assessments on fMRI data (8 min) collected from overnight abstinent smokers (n=24; 12 females; age=36 ±10) and nonsmokers (n=20; 10 females; age=30±7) following administration of nicotine (via patch), varenicline (via pill), both, or neither (placebo-controlled). We employed two bilateral VS seeds (right and left superior VS seeds [RVSs, LVSs] and right and left inferior VS seeds [RVSi, LVSi]) and assessed group effects (smoker vs. nonsmoker collapsed across drug sessions in independent samples t-tests) and drug effects (e.g., nicotine vs. placebo in a linear whole-brain mixed effects ANOVA using AFNI’s 3dLME). Regarding group effects, smokers (relative to nonsmokers) showed significantly greater rsFC between the RVSi seed and the medial prefrontal cortex, parahippocampal gyrus, and anterior cingulate cortex, whereas the LVSs seed showed greater rsFC with the superior frontal gyrus (Fig. 1A.). Regarding drug effects, we observed that among smokers, nicotine (vs. placebo) administration significantly reduced the rsFC between the RVSs seed and a cluster encompassing the insula, putamen, and parahippocampal gyrus (Pvoxelwise<0.005, cluster extent: 213 voxels, Pcorrected<0.05) (Fig. 1B.). No effect of Varenicline was observed. Taken together, these outcomes indicate that the rsFC of VS subregions are differentially impacted as a function of a smoking trait (smokers vs. nonsmokers) and the current pharmacological state of a smoker (nicotine vs. placebo).